‘Great songs are written because something needs to be expressed, not simply because one person has something to say. They are bigger than an individual ego.’

Over morning coffee I’d asked the punk music maestro Campino about how he creates a song; does he begin with the sound, or with the lyrics?

‘Your question comes at the perfect time,’ he smiled, sipping his Milchkaffee. ‘Next year will be the 30th anniversary of Die Toten Hosen as well as my 50th birthday. We’re planning a major tour in 2012. But if we don’t write new songs, we won’t be going anywhere.’

He explained, ‘For years I heard the music in my head, and the music had an atmosphere which lead me to the words. But I can’t write today as I did last year, or in the 1980s. One always needs to change how one creates, to find new means of expression. Now I’m searching for my new way. I’m trying to write the words first, working in a rhyme form, and then letting the music come.’

He laughed with heartfelt sincerity. ‘But I don’t know if it will work so I can’t tell you how I write songs. I am just a beginner…once again.’ 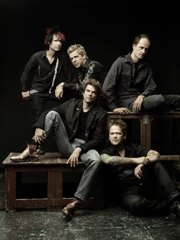 Campino is a beginner who – with the band Die Toten Hosen – has sold over 15,000,000 records, cut six Number One albums and won seven ECHO Awards (the German equivalent of the Grammys). As the most successful German-speaking rock band ever, Die Toten Hosen has also won a place in the heart of every rock fan in the country, and punk music aficionados around the world, because of their electrifying energy, artistic integrity and creative courage.

Campino and his Düsseldorf friends founded the band in 1982. ‘In those early days we were happy to play for petrol money or a case of beer,’ he told me.

The Goethe-Institut was an early supporter, inviting them to tour France, until then-Chancellor Helmut Kohl vetoed official support for the band, declaring that the Hosen were not representative of Germany.

‘We laughed about that because we had no master plan. Our aim was simply to have fun. We were on a crusade for happiness.’

Then their 1990 studio album Auf dem Kreuzzug ins Glück reached Number One and the band was invited to play with the Rolling Stones.

‘We didn’t know how to handle the success – we were punks and wanted to stay on the same level as our friends – so we decided to go “back” to London, to the music that started us out, and re-record those great hits with our idols.’

Learning English, Lesson One was the remarkable result, a compilation of 23 songs that had formed and influenced the Hosen. The cover album was also a unique Who’s Who of punk rock.

‘It was such an adventure, meeting and working with legends like Joey Ramone, Johnny Thunders, Charlie Harper and Jimmy Pursey of Sham 69.’

Learning English was a huge international success, although some British critics panned the album, maintaining that a German band didn’t need to remind them of their heritage. Nevertheless John Peel still played their music. He was the man who had the vision to invite the band onto his BBC Radio 1 Peel Sessions in 1984.

‘English punk is 100% our musical roots,’ Campino said with feeling. ‘The Jam, The Clash, they had something to say. They had aggro. But they weren’t just against things. They were for things: The Anti-Nazi League, kick out the fascists, fight racism. This was hugely important to me.’

I asked again about writing songs, specifically his deeply moving 2002 single Nur zu Besuch, composed after the death of his mother.

‘I’m a boy from a family of six children. As a family we were – and still are – very strong. My mother was English. My father was German. At the age of seven my great passion was for Liverpool Football Club. I was a hardcore supporter, in a way because of my mother.’

‘But as I grew up I became a bit of a troublemaker, dressing as a punk, singing the Sex Pistols’ “God save the Queen… the fascist regime… she ain’t no human being”. My mother took it to heart, and we became estranged for a time. She’d make me my breakfast yet leave the room when I came in.’

‘Then in 2000 Die Toten Hosen were at the start of a big tour. I tore a knee ligament and the tour had to be cancelled. The next day my mother fell ill. I took it as a sign to spend time with her in Düsseldorf. Over the next six months I saw her almost every day, and we had the best conversations of our life. We had the chance to make everything straight between us. That Christmas my sister and I were with her when she died.’ 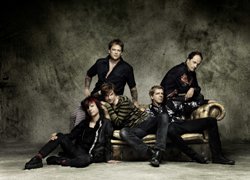 I wrote Nur zu Besuch in 15 minutes, and didn’t once revise the lyrics which is rare for me. The song was my way to say thank you to her. Since its release thousands of people have written to me, saying that they’d played it at a funeral or that it had helped them through their own loss, telling me that they recognised a little of themselves in Nur zu Besuch.’ Campino sat quietly for a moment, turning the coffee cup in his fingers. ‘I like the idea that everything isn’t purely accidental, that some things are meant to happen, even if we don’t understand why. I like to think that my mother would enjoy the song.’

Campino’s creativity has reached beyond the world of music. In 2006 he played Mack the Knife in Brecht’s The Threepenny Opera, directed by Klaus Maria Brandauer. ‘Brandauer was so patient with me as an amateur,’ he recalled. ‘I have only praise for this great man.’ The show became the year’s most successful German theatre production. Then in 2007 Wim Wenders wrote the script for the feature Palermo Shooting specifically with Campino in mind for the leading role.

In addition Campino’s strong social conscience has led him to support campaigns that increase cancer awareness. He is ‘godfather’ of the Regine Hildebrandt School in Birkenwerder, supporting its ‘School without Racism, School with Courage’ programme. As a whole the band has donated record income to the Düsseldorfer Appell gegen Fremdenfeindlichkeit und Rassismus (an appeal against xenophobia and racism). It is also the main sponsor and outfitter of Düsseldorf Fortuna, support which saved the football club from bankruptcy.

Through the morning Campino and I talked of his love of ice hockey (he supports both the DEG Metro Stars and the Berlin Eisbären), the band’s 2010 Central Asian tour (with welcome support from the Goethe-Institut), his enthusiasm for South American – and especially the ‘hearty and friendly’ Argentinean – fans (no international band will have played more gigs in Argentina than the Hosen after next year’s visit) and finally their planned 30th anniversary concert. At Easter 1982 the Hosen played their very first gig in Bremen (where they were introduced as ‘Die Toten Hasen’ – ‘The Dead Bunnies’).

‘So it would make sense to play there again at Easter 2012 – if we have new material.’ 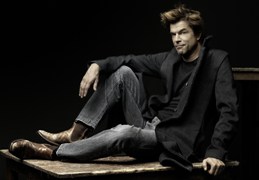 Campino opened his arms as if to entice a passing muse to our table. ‘I find it hard to get the truth down on paper,’ he admitted with disarming humility. ‘Every time I create, I know I am just a beginner.’

With those words he set off for work, to compose his new songs, to find new way of writing, reinventing himself – as all vibrant artists must do – again and again.